One of the factors that we consider when making a grant is how much of an impact that the project will make. By any measure, Rhizomatica is making a tremendous impact – both technologically, and in terms of the many communities who benefit from their work. Supporting Rhizomatica is one way that ARDC is making an impact in digital communications outside of amateur radio. 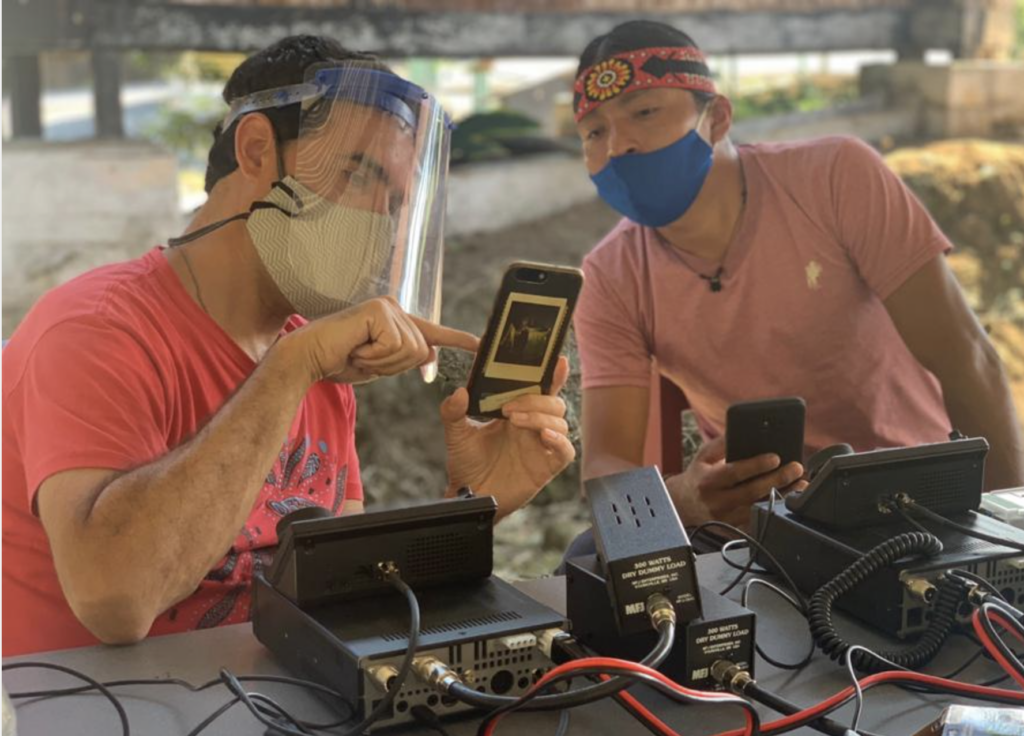 Through their work, they aim to create and promote technologies that reinforce community values like cooperation, trust and shared commitment. They are striving to develop technology that will serve rural and indigenous communities in ways that reinforce their values and ways of association. In doing so, they prevent these communities from being left behind.

One of the systems that Rhizomatica has developed to connect rural and indigenous communities is the High-frequency Emergency and Rural Multimedia Exchange System, or HERMES. As shown in the figure below, HERMES uses HF frequencies and sky-wave propagation to connect rural and isolated communities to base stations in more populated areas and provides limited internet service. The reason that HERMES uses HF links is because satellite links are usually too expensive and it can take a very long time—as well as a lot of money—to install terrestrial links.

The HERMES HF transceiver consists of the following components:

Both the hardware and software are open source. Documentation is available at https://github.com/Rhizomatica.

Using this hardware, a typical link might range anywhere from 50 km to 800 km. The radios operate in the 5.8 MHz commercial band, and with the standard uBitx v6 power output of about 13 W, they are able to transmit data at 3 kbytes per minute over a 2.5 kHz channel. At this data rate, HERMES can provide users with some of the services afforded by cell phones and the internet. This includes email and chat, secure, password-protected image, voice, text and file exchange between community stations, and a web interface for system administration.

Of course, these services don’t run as fast over an HF link as they would over a normal cell-phone connection. For example, images sent via a cellular network are transmitted and received almost instantaneously, while an encoded, standard-resolution image of about 10 kbytes will take just over three minutes to be transferred via HERMES. Similarly, an encoded, 20 s audio message of about 4 kbytes requires just over one minute to be transferred. Text messages and text emails, since they are usually short and can be highly compressed, can be transferred at about ten messages per minute.

Even so, that’s a big leap forward for some communities, explained Peter Bloom Rhizomatica’s founder and general coordinator. In the past, he noted, it might take someone a full day to transport a photo by boat.

Making an impact in Ecuador and Brazil

According to Bloom, there are currently ten second-generation HERMES systems installed, serving approximately 30,000 people in Ecuador and Brazil. One of these installations serves a group of rural trading outposts on the Amazon River. These outposts had been using analog radios to communicate information, such as inventory data, but this approach is risky: using unencrypted voice communications allows anyone to listen in. The HERMES system allows them to transmit this data digitally, which provides some level of protection.

HERMES is also being used by rural and Indigenous land defenders who are working to protect their lands from mining, logging, and farming companies that are encroaching on their lands and destroying the rainforest. Their job is to report what they see, but are fearful that they could be easily identified using analog radios. Using digital communications allows their communications to be more secure.

In addition to making this immediate impact, Rhizomatica is working on projects that they feel will make an impact in the future. One of these projects is an open-source replacement for VARA HF, a high-performance HF modem based on OFDM modulation. They are also working on improving Codec2, an open source speech codec designed for communications quality speech at low bit rates, and are experimenting with using artificial intelligence techniques to develop error correction codes.

For more information on how Rhizomatica is making an impact, go to https://rhizomatica.org.