These days, many hams are worried about the future of amateur radio, bemoaning the lack of young people in the hobby. One of the ways that amateur radio organizations are working to attract younger folks to the hobby is by offering scholarships. ARDC, for example, awarded the ARRL Foundation $400,000 for scholarships for the 2021-2022 school year. This grant funded one quarter of the 120 scholarships given out by the ARRL Foundation this school year.

That these bright, energetic students are also amateur radio operators bodes well for the hobby. Here are the stories of two ARDC scholars: Frances Bonte, KE8HPA, and Mason Matrazzo, KM4SII. 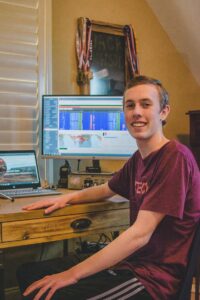 Mason, KM4SII, got started in radio after his grandfather showed him a SW radio he was 9. He is now studying wireless engineering at Auburn University.

For his next birthday, Mason got a Grundig SW radio and a copy of the World Radio-TV Handbook, which allowed him to explore the HF spectrum even more. Although neither radio could receive SSB signals, Mason discovered some hams operating AM on 75 meters one evening. By searching for their call signs on the internet, he discovered amateur radio. He obtained his Technician Class license in the spring of 2016, upgraded to General that summer, and got his Extra Class license in 2019.

Frances also credits her family for getting her started in amateur radio. Her father, Troy, AC8XP, rekindled his lifelong interest in amateur radio with a trip to the Dayton Hamvention in 2016. He brought along his son, Seamus, who shortly thereafter got his first license, and is now KE8GTT.

Her father and brother were having so much fun with ham radio that Frances decided that she wanted to get in on the act. Her experience at the Delaware (OH) Amateur Radio Association Field Day in 2017 cemented her interest in amateur radio. Under the tutelage of Bob, W8ERD, Frances operated the GOTA station and made a bunch of contacts. She enjoyed that experience so much, she decided that amateur radio was the hobby for her. She obtained her Tech license shortly thereafter, and upgraded to General in 2020.

A variety of interests 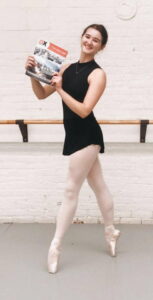 Frances is majoring in both materials engineering and dance at Case Western Reserve University. As she told me, she knows the difference between a balun and a ballerina!

Despite a relatively short career in amateur radio, Frances has already been involved in a number of projects and presented several papers, including:

She was also an invited youth presenter at the 2020 QSO Today Virtual Ham Expo.

In addition to the technical projects, she really enjoys the opportunity afforded by amateur radio to meet new people. For example, she attended this summer’s Youth on the Air (YOTA) camp and met people who were “doing a lot of new stuff.” She is also president of the Case Western Reserve University Amateur Radio Club.

Mason, on the other hand, likes to operate, and is heavily involved in contesting and DXing. His highest score in a contest so far is 1,350 contacts in 48 hours in the CQ WPX CW Contest. In addition to working contests on his own, he has been a part of several multi-operator teams, including WW2DX, which was a fully remote multiple-operator/multiple transmitter station in WPX SSB, 2020. This team not only won the contest, but set a new U.S. multi-operator record.

Mason is also big on DXing. He is close to achieving DXCC on 8 bands, and has operated from all over the world, including Curacao, Iceland, and Guatemala. In addition to his own DXing activities, he has also been a “pilot station” for the VP6D Ducie Island DXpedition in 2018, and the VP8PJ South Orkney DXpedition in 2020.

Like Frances, Mason values the connections and relationships that amateur radio has allowed him to make with people around the world. He also attended this summer’s YOTA camp and is a member of many different amateur radio clubs.

Not surprisingly, both Mason and Frances are pursuing technical degrees. Mason is attending Auburn University in Auburn, Alabama, where he is studying wireless engineering. This is a unique program that combines the fields of computer engineering and software engineering.

Frances is pursuing a degree in materials engineering at Case Western Reserve University in Cleveland, Ohio. Among her academic interests are batteries and how improvements in materials have an impact on society.

Both students are more than just tech geeks, though. Frances is also pursuing a degree in dance, and was involved in cheerleading in high school. As she puts it, she “definitively knows the difference between a balun and a ballerina!” Mason was a competitive swimmer in high school, and has a love of the outdoors and photography.

ARDC is happy to help these two young hams pursue their dreams. For the 2022-2023 school year, ARDC will be awarding even more scholarships. Not only will we be funding scholarships through the ARRL Foundation and the Foundation for Amateur Radio, but also through the Society for Women Engineers and some historically black colleges and universities. For more information on these scholarships, get in touch with the organizations listed above. For more information on how ARDC might help fund your scholarship, email giving@ardc.net.